What is the best way to transfer hydrogen over long distances?

As a manufactured fuel, hydrogen can be produced in a decentralized way in most countries around the world. This means, even in a net zero economy, the global trade of hydrogen could look quite different to the current international trade in fossil fuels, including natural gas.

Unlike oil or natural gas, transporting hydrogen over long distances is not an easy task. Hydrogen liquefaction is an extremely energy-intensive process, while maintaining the low temperature required for long-distance transportation and storage purposes results in additional energy losses and accompanying costs. The upside is that hydrogen can be converted into multiple carriers that have a higher energy density and higher transport capacity and can potentially be cheaper to transport over long distances. Among the substances currently identified as potential hydrogen carriers suitable for marine shipping, liquid ammonia, the so-called ‘liquid organic hydrogen carriers’ in general (toluene-methylcyclohexane (MCH) in particular), and methanol have received the most attention in recent years.

This paper written by Aliaksei Patonia, Research Fellow & Rahmatallah Poudineh, Senior Research Fellow, OIES, compares the key techno-economic characteristics of these potential carriers with that of liquified hydrogen in order to develop a better understanding of the ways in which hydrogen could be transported overseas in an efficient manner.

The paper also discusses other factors, beyond techno-economic features, that may affect the choice of optimum hydrogen carrier for long distance transport, as well as the global trade, of hydrogen. 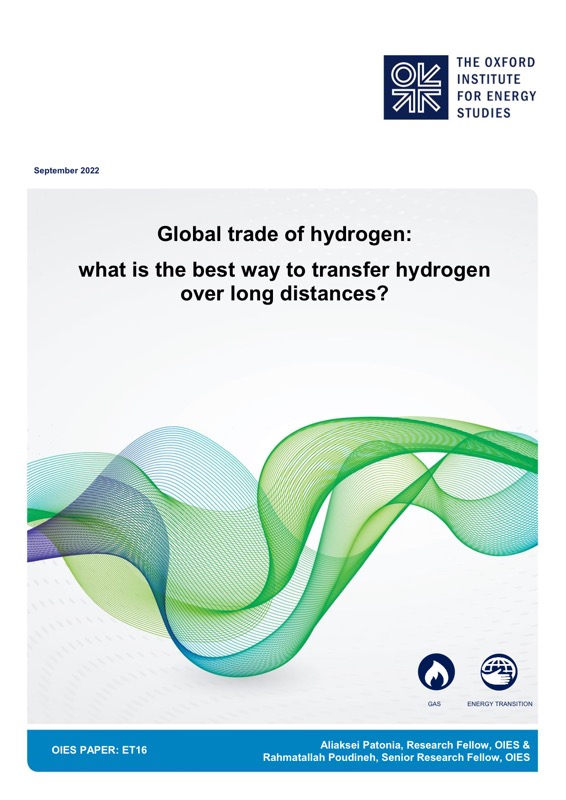